1001 Books You Must Read Before You Die Edited by Peter Boxall
A book designed for dipping into, which is what I'd done up 'til now. It's actually fun to read start to finish tho, as it explains the evolution of a novel. Spectacular illustrations. Turning up a good list of Books I Must Read too (lots of Gothic stuff on my list, so far).

Gentlemen of the Road by Michael Chabon
Wonderful rollicking adventure tale, originally published as a serial. Complete with Boys Own type engravings ("What a pair of swindlers!" he said admiringly) and silly chapter names (On Discord Arising From the Excessive Love of a Hat"). Delicate hints of Robert E. Howard and S. Rider Haggard. interview

High Fidelity by Nick Hornby
Excellent story, of a truly awful human being. I couldn't get Jack Black out of my head (from the fillum), which was annoying, and was not all that happy about the ending (I wanted him to stay appalling!) but still a great novel that I consumed in a few short days

The God of Small Things by Arundhati Roy
Beautiful, rich storytelling. I love the way it 'telegraphs' the climax, so you know what's going to happen long before it actually does. It shows a huge confidence in your story-telling ability, I reckon, to so completely abandon the power of the plot. wiki

Twenty-One Balloons by William Pčne du Bois
Reading aloud with Maxine. A little slow to get into the story, for a nine-year old, but once we got there, she loved it. study notes

Demons - Visions of Evil in Art by Laura Ward and Will Steeds
Beautifully illustrated, wonderful images of the Devil and his cohorts thru-out history. (Some Goya, some Blake, some Rackham, lots of old dudes) My only complaint is that so many images chosen are too detailed - without a magnifying glass you miss too much. Quite a bit of Dante- and Milton-inspired stuff.

Jungle Doctor Attacks Witchcraft by Paul White
I bought this on the basis of the horrendously racist pic on the front cover of a juju witchdoctor in full flight, but it's no-where near as appalling a tale as it appeared. Pretty obvious agenda (encouraging Good Clean Christians back home to give generously) but it's pretty up-front about that.
Sitting on the verandah as I came back was a man. A flash type, wearing the particular style of pink corduroy velvet short to which I objected.

The Atlas of Legendary Lands by Judyth A McLeod
Beautiful old maps, lovely old stories about mythological lands. A bit of Lemuria; a bit of Hawaiki. What's not to love? amazon

The Magician by Michael Scott
Sequel, aloud with Max the Girl I love the Mostest. Lovin' the random mythologies.

The Bible, again
Ezekiel: Spacemen,a bit more Nebuchadnezzar (we ain't sick of him yet), multiple metaphors for whopp-ass, and the bit Jules got wrong in Pulp Fiction
Jeremiah: Nebuchadnezzar smites Israel, then God smites EVERYONE.
Hosea: backtrack... God talks to Hosea inside his head and tells him to lie with harlots (yeah, good one Hosea).
Made it to New Testament at last !

The Road by Cormac McCarthy
The most gripping, harrowing, terrifying book I've ever read. Impossible to put down, but NOT to be read before trying to sleep (particularly if you're a parent). Beautiful, pared-back writing - almost poetry. guardian ... amazon discussion ... NYT ... wiki

Paradise Updated by Mic Looby
Lonely Planet-based novel. I had some fun reading this, altho a little distracted by trying to spot who's who. Not sure if anyone outside the company would find it as much fun.

Gormenghast by Mervyn Peake
Second time through. I love these characters! Could have filled a hundred books! fanart ... wiki

Witches of Eastwick by John Updike
A last-minute buy at the airport when I'd left Gormenghast at home. (Thank God for Penguin orange spines!) LOVED this book, tho the ending was a little non-committal. review

The Alchemist by Michael Scott
"The Secrets of the Immortal Nicholas Flamel". Reading it aloud with Maxine, mostly because Flamel appeared in the first Harry Potter book, and I thought she'd get into that. In fact, the fact he was a real character, and appears in wiki, was much more impressive. (Along with badguy John Dee, which was even spookier, apparently.) Good reading! wiki

The Lone Ranger at the Haunted Gulch by Fran Striker
I realised a while back that the Lone Ranger was my first ever superhero, back when a week's pocketmoney (20c) was precisely enough to buy one Lone Ranger comic. Striker's the man who created the Lone Ranger (and his grand-nephew, the Green Hornet, too), so when he says there's a (very dodgy sounding) reason for the silver bullets, he knows what he's talking about. wiki ... snopes ... imdb

Te Kaihau/The Windeater by Keri Hulme
Short stories. Second or third time through. Lookin' for material to filtch, then got in touch with her to write me something original!

Bulibasha by Witi Ihimaera
Second time thru, partly for work-related reasons. Loved this book even more this time, with my new-found passion for Christian mythology, and perhaps more appreciation for a good yarn, almost a Western in that way. Reading too for visual feasts because of the impending movie, and thinkin' the movie will be GREAT... there's so many great movie moments. wiki

Peter & Wendy by JM Barie
Second time through, this time aloud with Maxine. Wonderful imagery. She gets it. wiki

The Angel's Cut by Elizabeth Knox
Sequel to one of my favourite-ever novels, Vintner's Luck. Not as great, but still fun. A lot more Lucifer in this one, which is both cool and at the same time shows why his brief, unheralded appearance in Vintners Luck knocked your socks off.
A revealing quote: "We all have one story. But what would you do after that, and that, and that, day after day after dozens hundreds thousands and ten thousands of time?" wiki

Alice in Wonderland by Lewis Carroll
Aloud with Maxine. A bit trying at times, for an eight-year old, but Maxine endured and there's some cool stuff. Film impending - Tim Burton and Johnny Depp - yeehar. wiki

The Lives of Christopher Chant by Diana Wynne Jones
Fourth in the Chrestomanci series. Aloud with Maxine. Best so far! wiki

On the Road by Jack Kerouac
This is my second time thru this book. Long, long ago, about 15 years ago, a bloke sitting on the floor beside me in 'The Club' on Smith St Collingwood at around 3am told me to read this novel. Good advice, Unknown Dude. Crazy crazy energy. wiki ... who's who

The Arabian Nights - Entertainments Found this lovely little old hardcover in a second-hand bookshop up near Bendigo and it inspired me to finally read all these old stories. Loving them! Did Sinbad steal some of Ulyssess' action? wiki ... #1002!

Satanic Verses by Salman Rushdie
Finally read this novel, famous for the subsequent hoohar of course. I'm glad I waited - would not have enjoyed it anywhere near as much without getting to grips in the last few years with such flowery writing and the last year getting into Christian (and Islamic) mythology really helped too. I'm even reading Arabian Night at at the same time, which is kinda funny.
Actually, I reckon this is my new FAVOURITE NOVEL EVER, toppling Gormenghast at last! Going to have to read up more on some of the in-stories now... wiki ... article

Pellucidar by Edgar Rice Burroughs
Another centre-of-the-Earth romp by Burroughs, his hero "the Emperor David" subduing baddies and spreading the martial benefits of higher civilisation amongst the barbarians. wiki ... geeks guide

Almuric by Robert E Howard
More 'Man Love'. Howard's good at this kind of brutal stuff. Much more elemental and 'alive' than Burroughs (above) for example. Devoured this in one sitting on a flight from Singapore to HCMC. wiki 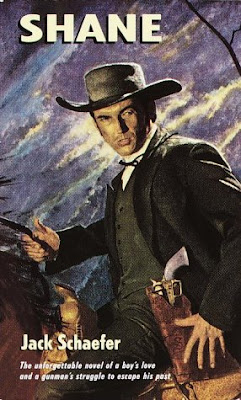 Shane by Jack Schaefer
The novel that the high-panted movie was based on, and for me much much better than the cinema version. A lot of Man Love going on here. I love that Shane's backstory is never explored - he's quite a mythical character. (That said, perhaps there's a film in Shane's backstory?) '"Yes," said Mr. Weir. "He's alive all right. Wilson got to him. But no bullet can kill that man." A puzzled, faraway sort of look flitted across Mr. Weir's face. "Sometimes I wonder whether anything ever could."' wiki ... article The Hobbit by JRRT
Reading it aloud with Maxine. The most delightful language, something I'm appreciating even more reading aloud (as always). The ascent of the Misty Mountains is one of the most beautiful passages. wiki ... tolkien

Ghost Stories by Charles Dickens
Collection of spooky short stories and excerpts. I've tried to get into Dickens a few times, but never with any success, but this has been brilliant! Some great stuff from Pickwick Papers and Nicholas Nickelby.

The Princess Bride: (S. Morgenstern's Classic Tale of True Love and High Adventure) by William Goldman
Read aloud with Maxine, as we both love the film so much. Doing the voices = much fun, particularly the wonderful Inigo Montoya wiki

Fraction of the Whole by Steve Toltz
Really, really wonderful Australian novel. If it's not yet a Most-Favourite-Novel-Ever, it's certainly in the Top Ten. (Don't ask me what the others are, other than Gormenghast it all moves around a little.) Soooo many beautiful ideas carelessly woven in that you really wonder if the poor chap has a second novel left in him! wiki ... book

The Dancing Wu-li Masters by Gary Zukav
Last time I read this, I was half-way thru a physics degree. The time before that I hadn't yet started in physics. Now, third time thru, I've pretty much abandoned physics. Funny. Actually, first time thru, this was a book that helped inspire me to drop a career in government sloth for a uni degree, so there's a soft spot in my heart for it. But jaysus, talk about new-age pap. Think Jonathan Livingston Seagull in a labcoat. To Zukav's credit, he always includes the full explanation in footnotes, even when it contradicts his flaky take on things. (Also to Zukav's credit, he's an ex Green Beret with anger issues, so I aint saying nothing against him.) wiki

Witch Week by Diana Wynne Jones
The third in the Chrestomanci series. Aloud with Maxine. Much snappier and more interesting than numbers one and two. wiki

Metamorphoses by Ophid
I've been meaning to read this a while, but needed to wait til I could find a prose version. This old classic (8 AD) is where all those "then he turned into X" stories are gathered together, ALL of them, as the story leaps from metamorphosis to metamorphosis like a frantic five-year old.