White Mischief by James Fox
Tragic old fart (Lord Braughton) kills playboy (Lord Erroll) and gets away with it. Like something out of Cluedo except it really happened. The book is a surpisingly good study of the murder of Josslyn Hay (Lord Erroll - thus the interest: ko Hay tetahi o oku iwi) in Kenya in 1941. Lords and ladies living it up in the colonies - riveting stuff. No really it is. Honest!.

Australia: A Biography of a Nation by Phillip Knightley
A bit erratic in places (much like anyone's bio' I guess?) but comes up with some surprising facts and histories and has some good theories about what makes Australian's Australian (including the bad stuff - the origin of good ol' fashioned Aussie racism for example).

The Silent Gods - Mysteries of Easter Island by Catherine and Michel Orliac
Part of the New Horizons series. Surprisingly good - with some great historical images and text.

The Age of Kali by William Dalrymple
Stories of the Indian subcontinent. Magnificent.

Chronicles by Margaret Weis & Tracy Hickman
Good escapism swords-n-sorcery made just a wee bit trippy by the hint of D&D game rules in the background.

First & Second Chronicles of Thomas Covenant by Stephen Donaldson
As annoying now as the first time through. Lovely language but does everyone have to be such a basket case?

Lord of the Rings by JRR Tolkien
(Nth time through.) Thought I'd better read it again before the film came out. Great, yes, but the film is better! Go Ben. Go Warren.

Cannibals & Converts by Maretu
Contemporary account of missionaries in the Cook Islands.

A Boy & His Uncle by Anne Kennedy NZ novel. Some really nice writing.


Black Ivory by Clint Rockman
Surely that's not his real name? "Clint Rockman"? No way! (Let's face it, would you put your real name on a book like this?)

Casino Royale by Ian Fleming
No worse than any other Fleming book.

The Hounds of Tindalos by Frank Belknap Long
Forgettable.

Frontier: The Battle for the North Island of New Zealand by Peter Maxwell
A good, in fact surprisingly good, history of the NZ Wars (1860s only) by an amateur historian with an unfortunate bee in his bonnet about James Belich.

Pre-Tasman Explorers by Ross Wiseman
Pre-Tasman (European) discoverers of NZ. Staring with the Spanish and the Portuguese (some tenuous evidence and speculation used to construct the most fantastic theories) then just gets better and better - Sinbad the Sailor. Whoo hooo! Barking mad.

Tarawera & the Terraces by Philip Andrews
The story of the 1886 eruption of Mt Tarawera and the destruction of the Pink and White Terraces. Some good old photos of the terraces and the area before and after - including one by Great Grandpa Cromwell.

Legends from the Atolls by Kauraka Kauraka
Myths and legends from Rakahanga and Manihiki in the northern Cook Islands.

Guide to Staying Alive in New Zealand by Gary McKormick
Stop Press: Aging Hippy Claims That Things These Days Just Ain't What They Used To Be.
Takes itself more seriously than other McKormick books I've read but still presented in the same wacky format.

The Riders by Tim Winton
Magnificent!

After Z Hour by Elizabeth Knox
A Kiwi novel. Gripping but tiring. Are there really people out there who have conversations like this?

Cook Islands Companion by Eliot Smith
A self-published guidebook. Good on history and the general "feel" of the place; chatty and easy to follow too.

Polynesian Navigation edited by Jack Golson
(A symposium on Andrew Sharp's Theory of Accidental Voyages.) Six experts in various fields comment on Sharp's "it's all bullshit" theory. For die-hard Polynesian voyaging geeks only (that's me - I loved it!). If only Tupaia had lived!

Moko by HG Robley
(The Art & History of Maori Tattooing). First published in 1896, the author freely admits that his writing ain't up to much but justifies the book by saying it's a vessel for his illustrations. The sad thing is - his illustrations are crap.

John Williams by Cecil Northcott
Fawning bio of the famous South Pacific missionary. Cecil doesn't even pretend to be unbiased about the chubby old Rev Johnny but by the end of the book the religious rants just get silly.

Land of Mists by Garry Kilworth
The third in the series (I missed the second but no great loss). The tale of 'Roof of Voyaging' continues - the characters have aged slightly but the author's lack of talent remains. Still, worth persevering with if you're a Pacific junky to see how various Pacific myths are woven in.

legends of the South Seas by Antony Alpers
A collection of Pacific island myths that tries to take a 'Pacific view' rather than reinterpreting the stories through Christian/European eyes. Lots of research involved in separating 'true' Pacific myths from those that have adapted to fit the times. Some of Greatetc Uncle JM Orsmond and Etcth Cousin Teuira Henry's work is included - gotta love that.

Harry Potter and the Goblet of Fire by JK Rowling
Not as good as the first three - I reckon - but still good. Red herrings too obvious, traditional twist at the end too deviously buried. Ha - maybe I'm just pissed off 'cos I couldn't predict it? Weird ending... Quite 'nasty' for a kiddies' book.

Against a Dark Background by Iain Banks
Sci-fi novel. Cool.

Cleary Independent by Phil Cleary
Autobiography by the Melbournian footy coach/MP. I used to be a big fan of this bloke - until he helped sink the republic a couple of years ago.

Omai: Pacific Envoy by EH McCormick
Very long study of the Raiatean Omai who spent a couple of years in England after hopping aboard one of Jimbo Cook's ships. Fascinating although it could be half the size - I think the author was showing off how many tiny uninteresting details he'd uncovered. Also strangely prudish - Omai's 'romantic liaisons' referred to only very obliquely. Omai comes across as a decent bloke but no rocket scientist; if only Tupaia had survived! 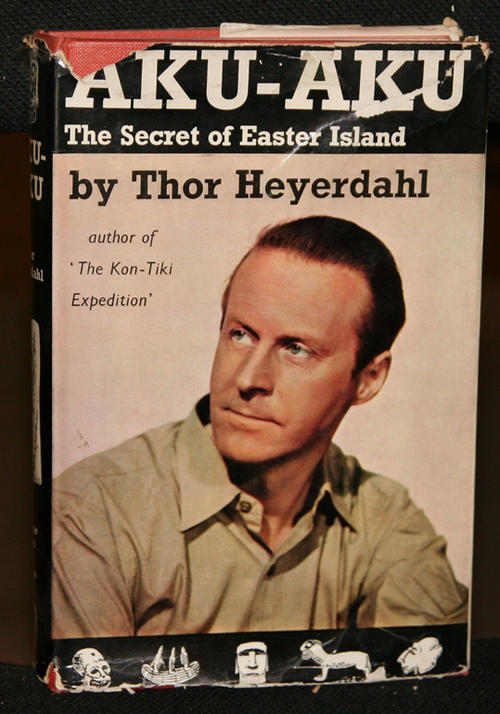 Aku Aku by Thor Heyerdahl
The story of the first major archeaological expedition to Easter Island, in the 1950s. Scientifically very interesting, although Heyerdahl starts with a conclusion and then goes looking for evidence to support it (not an uncommon scientific error). The human story is much more interesting though - Heyerdahl slowly (and without commenting on it) transforms from a man who openly laughs at the Easter Islanders' culture to taking it quite seriously. The hero, for me, is the mayor, who bravely protects his cultural treasures despite Heyerdahl's scorn, bribery, bullying and what sounds to me like simple criminal fraud (faking the discovery of the whale carving). (I assume Heyerdahl's lawyers read the book before he published so it probably wasn't strictly criminal.)
(This is the first time in this list that I've 'bolded' a book that shat me quite so much - Heyerdahl's behaviour was that of a complete shit of a man - but the book was riveting.)

State of the Art by Iain Banks
Sci-fi collection of short stories. A couple of typically Banksey train-of-thought rambles but great otherwise.